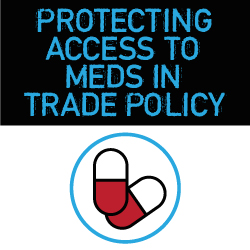 To read the latest on the TPP, check out our two-pager HERE.

Since 2008, the Trans Pacific Partnership has been in the works. It has been mostly negotiated in secret, and then unveiled in 2015. The Trans-Pacific Partnership (TPP) is a trade deal that is currently being negotiated between the United States and 11 other countries. The leaked drafts include strengthening of intellectual property (IP) rules that enhance patent and data protection for pharmaceutical companies. International treatment initiatives, such as PEPFAR and the Global Fund, depend on affordable, generic prescription drugs to scale up their treatment programs. By restricting access to generic medicines, less people will receive treatment and fewer lives will be saved.

Since congress voted to "fast-track" Congress can only vote on the bill in its entirety, without proposing amendments. Fast-tracking this trade agreement was an attempt to push through a damaging, widely opposed trade agreement through undemocratic means. But the TPP can still be stopped with pressure from us.

Now is the time. From now until December 16th, the access to medicines movement must focus on stopping the TPP, which could come up for a vote anywhere from Nov. 14th-December 16th. This vote may be sudden, and every single vote will count, as it could come down to just a few votes needed to win.

For the rest of October and November, we are pushing to make sure Congress will not ratify the biggest trade deal in history.

What can you do this month to be an effective advocate? (October-December)

Reach out to as many people as you can this month and get them to sign onto a pledge to flood Congress with calls the day a vote comes up (If you haven't done so yet, fill out this form and we will let you know via phone or email that the TPP has gone up for a vote).

October 27: SGAC national call, Why is the TPP so bad for access to medicines, anyway?

If you have questions don't hesitate to email SGAC National Organizer, Emily Sanderson at [email protected], or call.
Do you like this page?
Tweet