“Could any of you imagine getting that test result, sitting in that chair, when you didn’t even know HIV existed?” Robbie Lawlor had just relived the moment when his life drastically changed, and the auditorium fell silent as the impact of his words washed over me and my classmates. After graduating with a degree in his home country of Ireland in 2012, Robbie had been ready to pursue his lifelong dream of launching a career as a zoologist in Australia. His expectations quickly changed when he found out that people living with HIV were barred from entering the country. Robbie recounted the fear he felt moments after his HIV diagnosis, his battle with depression, the sobering reality of lifelong HIV treatment options, and the sudden disruption and realignment of his life—and how he turned his new diagnosis into a fulfilling life path. As the night went on, the three other speakers got up and shared their stories too.

My university was his final stop on the Youth Stop AIDS Speaker Tour, a multi-city journey of young people living with HIV using personal storytelling to mobilize students to collective action to address the AIDS crisis.

Robbie shared his story openly, honestly, and humorously with us,, while calling on us to intensify our advocacy and campaigning to increase funding for lifesaving HIV treatment and prevention programs around the world so that everyone with HIV can live a full and healthy life like him.

We empathized with New Yorker Jawanza Williams, who, after learning his status in his hometown in Texas in 2013, came home to an empty house and thoughts of suicide. Williams immediately started learning everything he could about HIV. He quickly learned that his HIV status is connected to his race, socioeconomic status, and geographical location. This discovery led him to become an activist. He is now the statewide organizer for Voices of Community Leaders and Activists (VOCAL-NY), leading a movement to end homelessness and increase services for people living with HIV/AIDS in NY state, especially LGBTQ youth.

We heard Horcelie Sinda, who immigrated from her home country of the Democratic Republic of the Congo to the UK at a young age and began taking HIV treatment. She’d been born HIV positive but didn’t start receiving treatment until she moved to the UK. She said she felt lucky because she moved to a country where treatment was available. Just under half of all people in the world with HIV do not have access to treatment, and in the Democratic Republic of the Congo , HIV treatment coverage is even lower: only 42% of adults and children with HIV have access to treatment. She now spends much of her time as a proud HIV-positive activist fighting for more international support for countries like where she was born and calling for an end to violence against women. 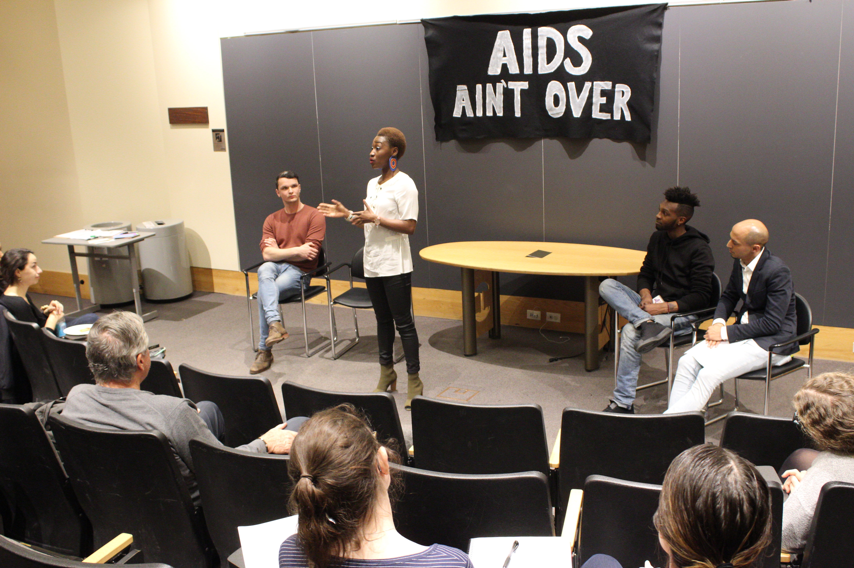 Too many people fail to understand that vulnerability to HIV is not caused by a particular lifestyle or “reckless choices,” but rather by inequity in access to effective HIV prevention and treatment and structural factors such as racism, homophobia, and criminalization. Another powerful speaker, Krishen Samuel, told us about the fear that was instilled in him during his university classes about becoming HIV positive—and being proactive by going to get tested for HIV eight times a year while using condoms faithfully. But he lives in South Africa, the country with the largest HIV epidemic in the world. He is now a bold activist with a Masters in Global Public Health, working to bring more attention and action toward ending AIDS. For Krishen, living with HIV has been a life-affirming experience.

The HIV-positive speakers forced us to rethink our entrenched ideas about HIV. At places like Harvard, the AIDS pandemic is too often spoken of as a thing of the past. Living in a wealthy country means having access to medicines that suppress and prevent the virus from being transferred to others, as well as help people with HIV live a long, healthy life. Living in the wealthiest country in the world also means we have the resources to provide for people in countries that can’t provide this same level of access to life-saving medicines.

We have made significant progress in the fight against HIV, but no one in that auditorium left thinking that where we are today is anywhere close to acceptable.

The next day, all four of the Youth Stop AIDS Speakers, the SGAC national organizer, four other Harvard students, and myself went straight to the people who have power to make change: our Members of Congress. We told them why, as constituents, we are committed to ending the AIDS crisis. We told them what they could do to make this very feasible goal a reality. 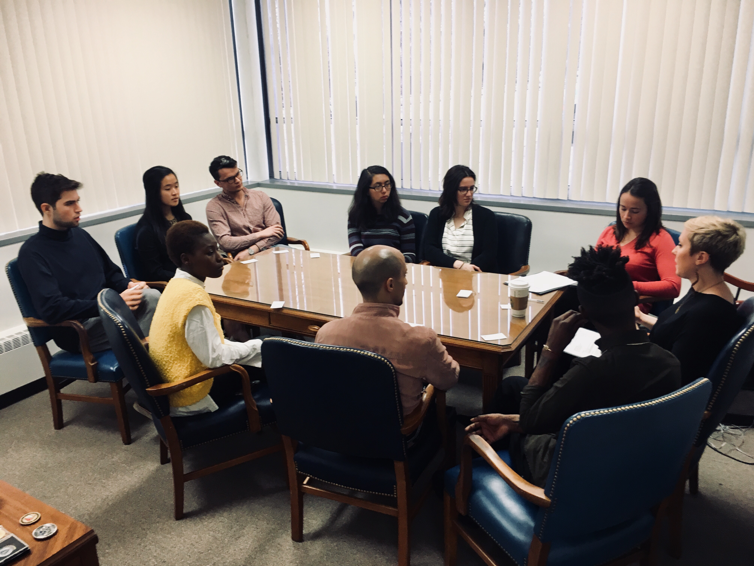 Our crew of students and speakers, informing Rep. Katherine Clark’s staffer about what the Congresswoman can do to fight for more funding for the global HIV response

Unfortunately, the nearly 1 in 2 people living with HIV who still don’t have access to life-saving medicines remain, for the most part, anonymous, their personal stories subsumed by statistics and large numbers. But, in hearing Robbie, Jawanza, Horcelie, and Krishen tell their stories, we can imagine their lives, and take concrete actions to help save them.

In a time where we have the resources and the money to end the AIDS pandemic once and for all—when even one life lost would be unacceptable—35 million lives lost is deplorable. And because of our failure to grasp the magnitude of this tragedy and act accordingly, people continue to die at a rate of roughly one million per year.

At Harvard, we have access to a great education, countless resources, well-connected alumni, and the prestige that the name carries itself. I left the auditorium that night with a renewed commitment to use these privileges to fight for increased funding for countries battling their own AIDS epidemics, to dismantle the inequities in access to HIV treatment and prevention, and to uplift policies that promote the human rights of people living with HIV. 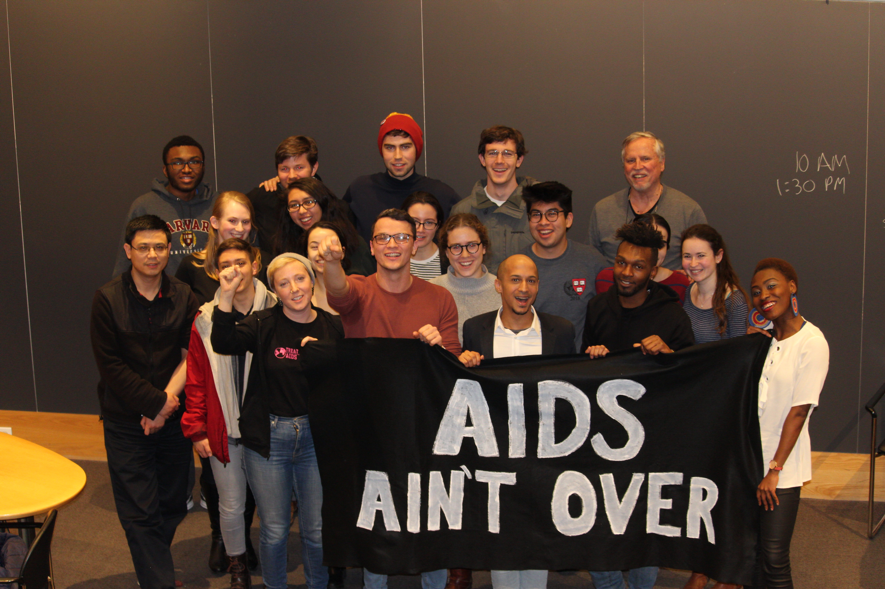 Harvard Global Health and AIDS Coalition poses with the speakers