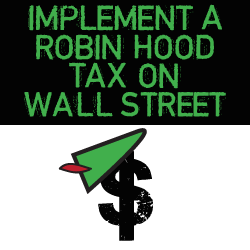 We have all the tools we need to end the AIDS pandemic, but we need the funding to implement these tools around the globe. 9 million people are still in immediate need of HIV treatment, but we’re constantly told that we do not have the money to invest more into global health programs. Dr. Anthony Fauci, head of the National Institute of Allergy and Infectious Diseases has said “if you don’t put in the money now, sooner or later you will have to pay.”

We need the money NOW to invest in global AIDS programs. A Robin Hood Tax (RHT) on Wall Street, also called a financial transaction tax (FTT) could provide the revenue needed to invest the amount of money we need to end AIDS (and also do a whole lot of other good things!)

What is the Robin Hood Tax?

The Robin Hood Tax, or the Financial Transaction Tax, would be a small tax on speculative financial transactions on Wall Street, that includes stocks and shares, the buying and selling of currency, and other financial assets. The tax offers a mechanism that can raise much-needed revenue for the U.S. government and arguably enhance the efficiency of our markets, while at the same time curbing speculative activity that destabilizes our economy. Economists estimate that a tax of 0.5% on stocks, 0.1% on bonds, and 0.005% on derivatives could raise between $150 and $350 billion a year! This money could be used not only for global health programs, but for infrastructure development, job creation, student debt reduction, education, healthcare climate change prevention and environmental protection.

Proposals for an FTT have received support from a range of European, U.S. and African leaders, as well as economists, business leaders, and civil society organizations.

The FTT has been implemented in a variety of settings – it’s used in over 40 other countries including the United Kingdom where it raises more than £3 billion each year. Eleven European Union countries are currently adopting an FTT.

The United States had an FTT from 1914 until 1966, and there is now a growing call not only from advocates and activists, but from economists, business-leaders, and political leaders to reinstate it.

Where are we now?

Representative Keith Ellison (D-MN) has introduced “HR 1579: The Inclusive Prosperity Act” in Congress, which calls for the tax that we want!

We need more Congress members to co-sponsor the legislation and advocate not only for a financial transaction tax, but for one at the level we’re asking for (0.5%)!