Restoring Full Funding for the Global Fund and PEPFAR 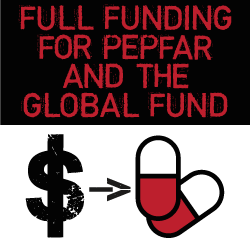 There are two main global AIDS funding streams: the President’s Emergency Plan for AIDS Relief (PEPFAR) and the Global Fund to Fight AIDS, Tuberculosis, and Malaria.

Since President Obama has come into office, we have seen dangerous flat funding for PEPFAR and The Global Fund. While some legislators argue that flat funding is a win, given it could have faced cuts, it is devastating. We are at a tipping point in the epidemic where infection rates are decreasing, people who test HIV+ are expected to receive treatment immediately upon diagnosis, (which has not been the case, historically), but more than half of the people around the world who are HIV+ do not have access to treatment.

The global AIDS response has seen a sharp decline in both the political and financial support it receives from governments across the world – particularly in the United States. We can’t end the AIDS pandemic without an increase in funds to support access to treatment and prevention services globally.

The United States has led the world in the fight against AIDS by creating PEPFAR in 2003 (the largest bilateral program to support AIDS relief) and being a leading funder of the Global Fund.

President Bush announced the creation of PEPFAR in 2003, after an activist campaign to win a multi-year commitment to fund global AIDS programs. It was originally a $15 billion over 5 year commitment to fight AIDS in fifteen countries, but in its first 5 years, the U.S. contributed $19 billion to the program. PEPFAR is the largest bilateral program to support AIDS relief in the world.

For the FY 2017 budget, President Obama has recommended flat-funding to PEPFAR, making it a steep uphill climb for legislators to suggest more funding. But that's why we're here: to tell them that as members of congress who represent us, that they must advocate for what we see as important.

What does PEPFAR do?

The Global Fund is a partnership between governments, civil society, the private sector and affected communities. It is a multilateral program , with funding received from more than one donor. The Global Fund does not implement programs directly, relying instead on a broad network of partnerships with other development organizations on the ground to supply local knowledge and technical assistance where required. Countries that wish to apply for funding convene a coalition of public, private and non- governmental organizations to write a grant. A technical review panel evaluates that grant based on effectiveness.

What does the Global Fund do?

What do we want?