The 2012 SGAC conference, hosted at Columbia University in New York City, was a great success! We brought together over 70 student leaders (from chapters as far away as Iowa and Florida!) for a weekend of trainings, brainstorming, and bonding.

Check out some of the highlights from this year's conference:

SGAC at the Republican Debate in Dartmouth

On October 11th 2011, members of the Student Global AIDS Campaign and our allies marched to the doors of the Republican Debate at Dartmouth College to demand that each candidate release a comprehensive plan to end AIDS.

We marched through the buildings where the candidates' campaigns were meeting, to make sure they heard our message directly. We dropped a giant banner from the roof of the building across the street. We held multiple "die-ins" across campus, to highlight the real consequences of inaction on AIDS. We went to events for every candidate and raised this issue, garnering press coverage from the Wall Street Journal, MSNBC, the Boston Herald, and at least six other media outlets.

And perhaps most excitingly, after being questioned repeatedly by students in the lead-up to the debate, five of the candidates responded to students' demands to fund global AIDS programs. Their answers ranged from "we'll see" to "we need to protect foreign aid from cuts", which shows how far we've come from the days when candidates said flat-out "no, we have to cut funding for everything".

Who is SGAC? Video

Check out this video of SGAC superstars:

SGAC is launching a "virtual vigil". We want to get 5,000 people to submit photos of themselves holding up signs or candles, and we'll bring them to our leaders and demand that they end AIDS. 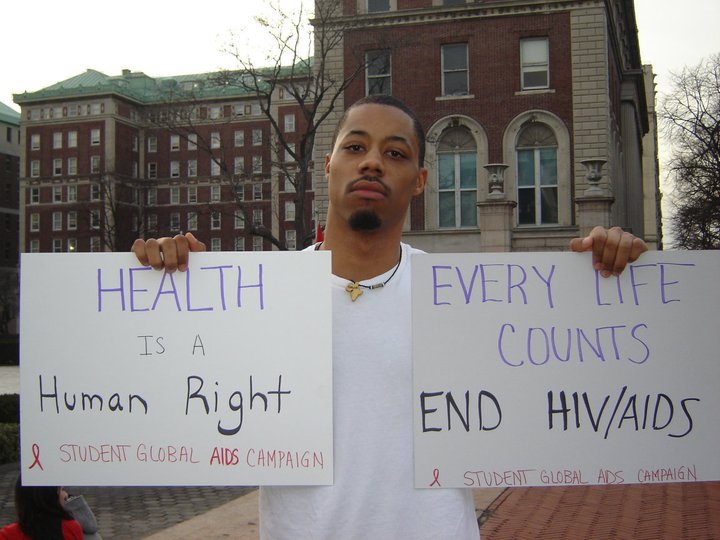 You can see the full album of pictures here.

New Photos of SGACers In Action

The New School Queerocracy (an SGAC affiliate) held a Valentine's Day Rally to raise awareness about the growing waiting lists for AIDS treatment in the US and worldwide. 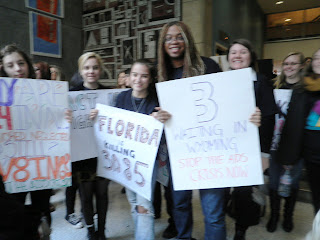 Thanks to everyone who came out for the 2011 Winter Conference in Boston, MA. We had nearly 80 participants from 16 different schools across the country.

Five million people worldwide have access to HIV treatment, thanks in large part to the availability of cheap generic medication produced in India. India has a history of standing up to Big Pharma, and supporting access to life-saving generic medication. But right now, India is being pushed by Pharma and the European Union to sign a Free Trade Agreement (FTA) that would expand protections for pharmaceutical companies and hinder production of new generic HIV medications. [1]

Not only would this agreement have disastrous consequences for the lives of millions of people around the world who rely on generic medication - it would severely hinder the US global AIDS program (PEPFAR). Generics, mostly from India, account for 75% of the HIV treatments purchased by the US government.

Will you email the US Ambassador to India Timothy Roemer and ask him to encourage Indian Prime Minister Singh to continue to fight for access to medicine?

Because the US government purchases mostly generic medication instead of expensive name-brand medication, PEPFAR has saved over $325 million from 2003-2008, according to a State Department report. [2] So, not only would the EU-India FTA virtually eliminate the chance of ensuring access to treatment for everyone with HIV, it would also cost the US government significantly more to continue providing treatment to those we're already supporting.


India is deciding whether or not to agree to expanded protections for Big Pharma in the next few days, so please email Ambassador Roemer now.

Here's how the EU-India FTA would limit generic availability - Generic drug companies demonstrate that their products are identical to brand-name companies' products, and then rely on brand name companies' drug trials to show their drugs are safe and effective. 'Data exclusivity' prevents generic companies from doing this by making it illegal for them to use the safety data already generated by the brand-name companies; instead, generic companies are forced to redo the clinical trials, which is prohibitively expensive, medically unethical, and delays access to treatment. The EU-India FTA sets the period of 'data exclusivity' at ten years. So, for the decade until the 'data exclusivity' on each new medication expires, important new, less-toxic HIV medications (which are widely available in the US) will simply be priced out of reach of millions who need them.


India doesn't have to agree to this! Please email Ambassador Roemer now, and then forward this email to your friends and ask them to join you in taking action.

[2] Use of Generic Antiretroviral Drugs and Cost Savings in US HIV Treatment Programs, US Department of State

Editorial: A Worthy Struggle
Harvard students’ efforts to fight AIDS should be praised

Last week, more than 100 people gathered on Boston Common to commemorate World AIDS Day 2010. Prominent among the event’s organizers and attendees were representatives from several Harvard student organizations. We are particularly proud of Harvard students’ involvement in national and international efforts to eradicate AIDS, and we commend the initiative demonstrated by our fellow students as they attempt to hold our leaders accountable for the promises they made during the previous election cycle.

Even if their efforts amount to nothing, these students at least are sending an important message about the relevance of youth activism in modern politics.

These campus activists’ engagement in global health policy is particularly admirable when one considers the apathy and political disengagement that unfortunately has become all-too-pervasive in the past two years. Although young voters played a key role in the election of President Obama, recent data suggest that this same demographic was decidedly apathetic in the 2010 election cycle. Only 20 percent of eligible voters under the age of 30 cast ballots a month ago, compared to a record-high 51 percent in November 2008. Given this level of youth disengagement, the new generation of AIDS activists’ passion for justice is truly heartening.

Additionally, it is very exciting to see a diverse coalition of student groups coming together to work on this initiative, especially given how difficult it can be for student groups to collaborate on campus. Among the groups represented at the rally on the Common were the Harvard African Student Association, the Harvard College Global Health and AIDS Coalition, the Black Students Association, the Chinese Students Association, Harvard Queer Students and Allies, and several campus religious groups. This sort of campus unity will be especially critical for continued advocacy efforts.

While we laud these student activists’ focus on increasing U.S. foreign aid for AIDS prevention and treatment through the U.S. President’s Emergency Plan for AIDS Relief, we also want to call attention to the domestic side of AIDS activism. In 2006, 31 percent of new AIDS transmissions in the United States were via heterosexual contact—AIDS is not a problem only among high-risk groups like men who have sex with men and intravenous drug users. As such, it is imperative that public health officials and agencies in the United States emphasize safe sex practices among all Americans, regardless of sexual orientation.

Finally, from a policy standpoint, we wholeheartedly agree with the claims made by the Harvard organizers of World AIDS Day 2010. The Obama administration must follow through on its campaign promises to aggressively combat the spread of AIDS in sub-Saharan Africa. President Obama’s $300 million funding requests to Congress look particularly pitiful in light of the potentially massive costs of extending the Bush tax cuts, the $84 billion requested by Senate Republicans for the modernization of our nuclear arsenal, and the simple fact that the requested amount would do little more than adjust for inflation in the current AIDS budget. It is high time the White House follow through on its lofty rhetoric concerning global AIDS policy, and we applaud the Harvard students and affiliates who have already donated so much of their time and energy to such a worthwhile cause.

Members of the Student Global AIDS Campaign at Harvard University demonstrated inside a panel discussion that featured Global AIDS Ambassador Eric Goosby and Senator John Kerry. They were calling for Goosby and Kerry to work with Obama to keep his promise to fund global AIDS programs!