The President's Budget is in, and it isn't great for PEPFAR. While the President suggested funding for the Global Fund at $1.65 B (which we applaud), he suggested a drastic funding cut to PEPFAR. At the beginning of next week (April 15th) members of Congress and Senators will be submitting their funding "wish lists" to the Appropriations Committee - lets get them to include funding for PEPFAR at the needed level.

Use the following script as a guide:

"Hello, my name is ___________ from ____________ and I'm calling to ask that Representative/Senator _________ submit a request in response to the President's budget demanding increased funding for domestic and global HIV/AIDS programs. While the President's request of $1.65 Billion for the Global Fund to Fight AIDS, TB, and Malaria is commendable, his request for the President's Emergency Plan for AIDS Relief (PEPFAR) is severely deficient. PEPFAR must be funded at a level of at least $4.58 billion to continue our current investment in ending the AIDS pandemic.
Fighting HIV/AIDS is a fully bipartisan issue; at a time when we have the tools and expert consensus to foresee an end to the HIV/AIDS epidemic due to scientific breakthroughs, America cannot afford to go back on it's pledge to realize an AIDS-free generation. Scaling back on our cost-effective programs will cost thousands of lives, weaken global economic development, and threaten our national security. A decade of critical investement and American leadership cannot fail now after significant evidence-based progress. We ask that Senator/Representative ____________ include in their funding wishlist a commitment to fully funding these life-saving programs."

Email Amirah to let us know about the calls you make!

Students from City College NY, Columbia, Harvard, Iowa State, and Yale University came to Washington, DC this spring break to fight for an end to AIDS. The students traded in swimsuits and tequila for suits and ties, and took to the hill to get their legislators to support full funding for Global AIDS Programs, the Robin Hood Tax on Wall Street to end AIDS, and lifting the federal ban on syringe exchange funding. 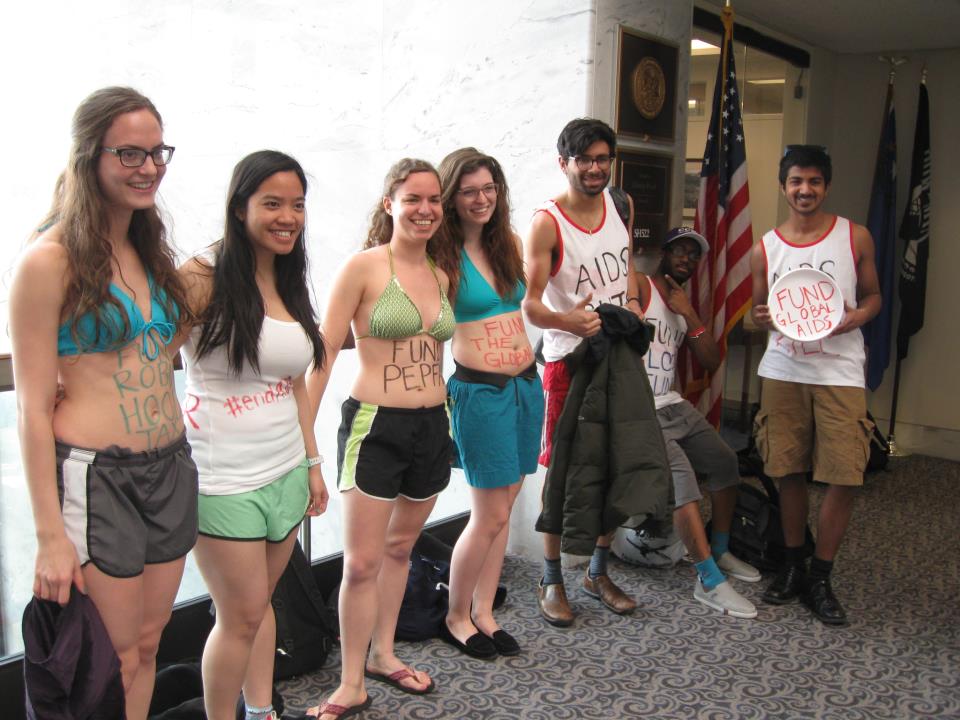 On Thursday, March 21st, the group took over Senate Majority Leader Harry Reid's office with a Spring Break beach party. Their message: "AIDS Doesn't Take Spring Break, Neither Can It's Funding". The students sung staffers their rendition of the hit song, "Call Me, Maybe", entitled "Fund AIDS, Harry!", and agreed to leave peacefully after securing a meeting with Reid's office.

On March 11th, students from the Harvard SGAC chapter protested Eric Cantor due to his inaction on funding Global AIDS programs, and lifting the federal ban on syringe exchange funding. This is the second time that Harvard SGAC has met with Eric Cantor - the first took place in February 2011, when nearly 200 SGAC students from the northeast met up at Harvard to protest Eric Cantor's proposed cuts to global health funding.

Check out the coverage of the action in the Harvard Crimson.

What an amazing weekend! Our 2013 National Conference took place from February 1st to 3rd in Colchester, Vermont, hosted by the incredible St. Mike's SGAC Chapter. A huge thank you to everyone who helped make the conference a success! 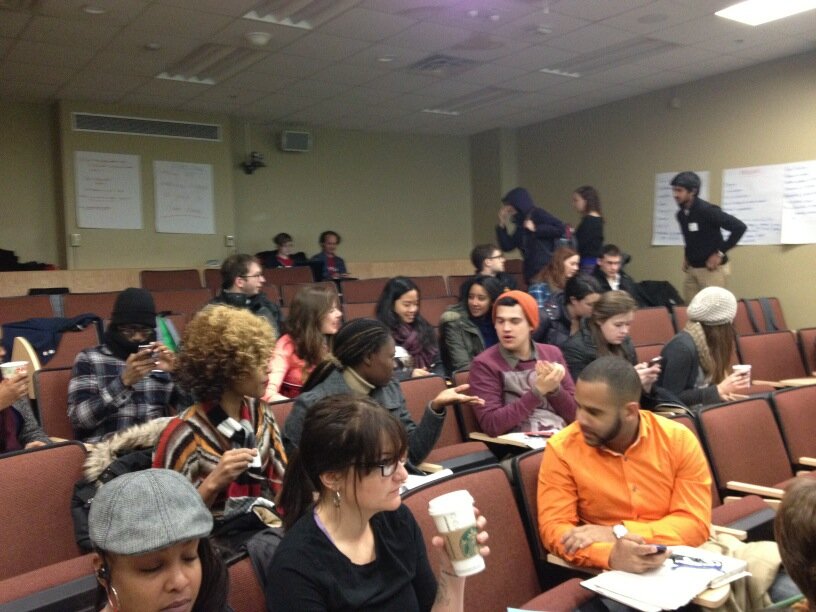 We had a great time learning about the current challenges facing us, building advocacy skills, and bonding with new friends from all over the country! We also created a strategy for the spring semester to hold leaders accountable and save the lives of thousands of people. We have a big job ahead of us, but SGAC has achieved incredible wins before and will do so this spring, too, thanks in part to the relationships we formed and the tools we gained this weekend!

Ending AIDS in Kenya: Funding Mechanisms for the End to Global AIDS

by Paul Davis of HealthGAP

Robin Hood is Coming: A Tiny Tax to End AIDS

by Jennifer Flynn of HealthGAP

Note: On slide 9, the incorrect subcommittee is highlighted. We are interested in the State, Foreign Operations, and Related Programs subcommittee that governs global health funding programs.

The fundraiser party was amazing! Thank you to everyone who was able to attend and support our work. You can view photos from the party here.

Couldn't make the party? Celebrate the next generation of AIDS activism any time with a donation to SGAC.

SGAC chapters across the country are preparing for a week of action surrounding World AIDS Day 2012 (December 1st). We will be advocating against budget cuts to life-saving AIDS programs.

Do you need ideas for World AIDS Day events and actions to plan at your school? Want to learn how to most effectively advocate to your legislators? Check our our World AIDS Week 2012 Campaign Kit! We got together with the AIDS Advocacy Network of the American Medical Students Association, to put together this comprehensive guide to help you change history this World AIDS Day.
If you have any questions, or would like ideas or support for your advocacy efforts, email our National Coordinator, Amirah.
Add your reaction Share

How to Survive a Plague Soundtrack Available Now

Have you seen the award-winning documentary How To Survive A Plague yet? If you have, then you know that the soundtrack is great - and it just got even better! All proceeds from the sales of the soundtrack will be donated to the Student Global AIDS Campaign!

The soundtrack is now available for purchase on iTunes - for less than $10 you can buy fantastic music, and donate to support the lifesaving advocacy work of the Student Global AIDS Campaign. The score by brooklyn-based Superhuman Happiness features members of Antibalas, TV On The Radio, Iron and Wine, and The Phenomenal Handclap Band.

You can purchase the soundtrack here.

If you haven't seen How To Survive A Plague yet, or if you have and you'd like to set up a screening in your community or on your college campus, please email Amirah to schedule a screening. The film recently received the Gotham Award for Best Documentary of the Year, the New York Film Critic's Award for Best First Film, and has been shortlisted for an Academy Award. More than that, it tells the incredible story of ACT UP and the Treatment Action Group's fight for AIDS treatment in the 1980's and 1990's. The film is a wonderful tool to inspire new activists to get involved in the AIDS movement.

If you'd like to further support SGAC and the wonderful work of our student and youth activists, please donate here.

SGAC at the 2012 International AIDS Conference

From July 22-27 2012, SGAC was at the International AIDS Conference. Amirah & Mel really enjoyed meeting everyone who visited. For those of you who weren't able to attend, here's what our booth looked like (with a bunch of SGACers tired out from the We Can End AIDS March hanging out in front!): 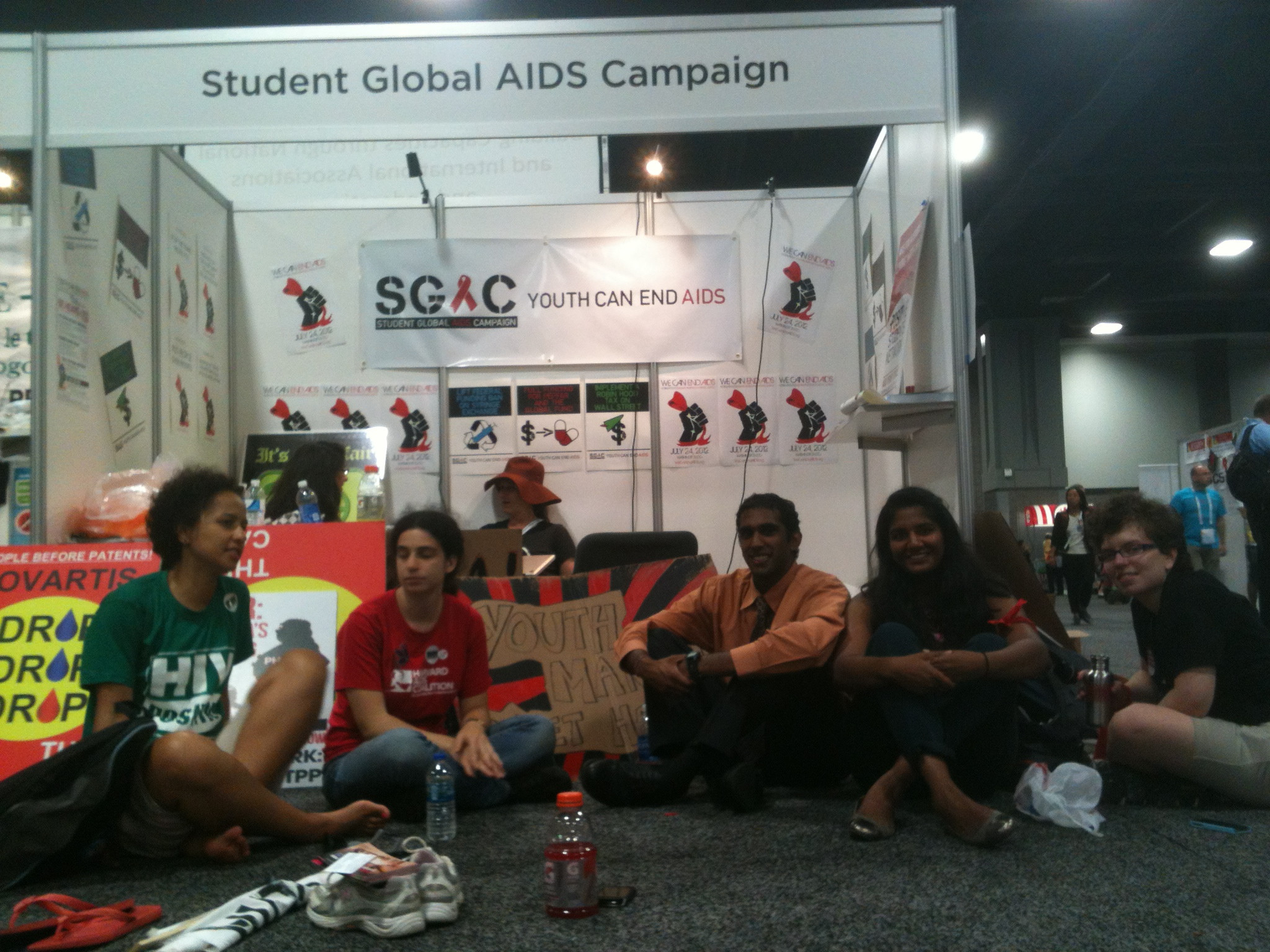 Check out the rest of the pictures in our facebook album!

Materials we used at AIDS 2012

Check out the following materials to get a sense of what SGAC did at the International AIDS Conference.

Points mean prizes (probably). Help us make noise and hold leaders accountable! Can you help us get 500 young people to the We Can End AIDS March? Stop by our booth to pick up a hard copy and please share this image! 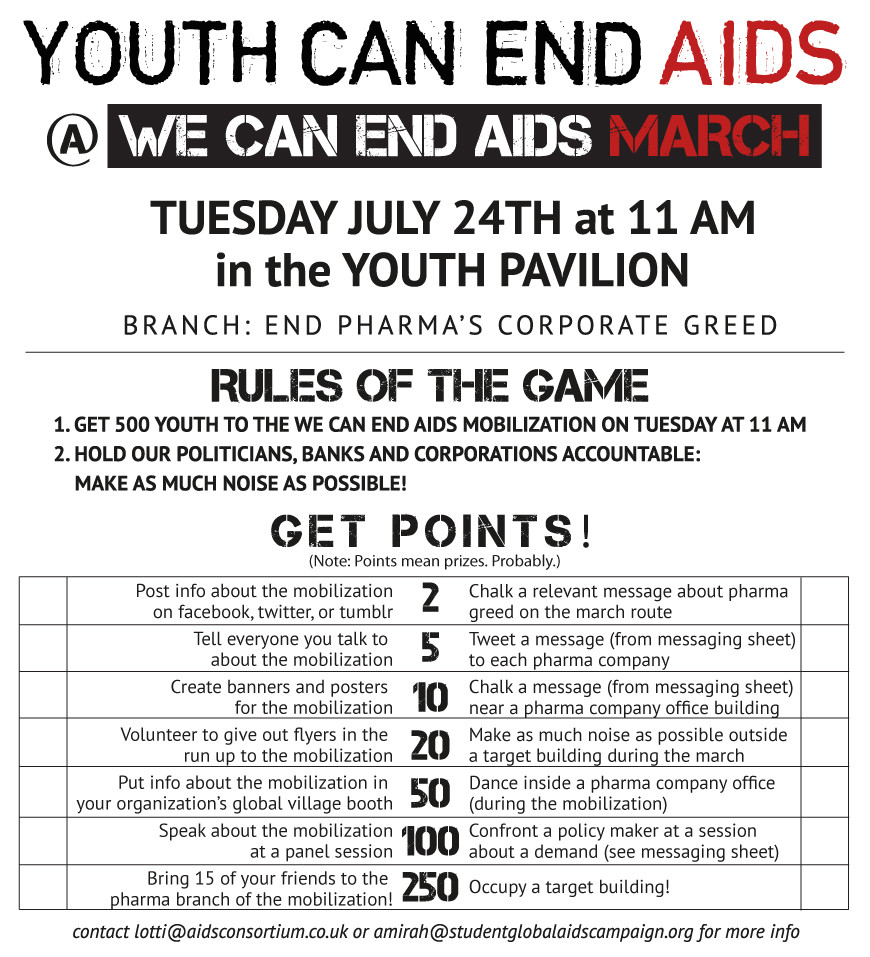 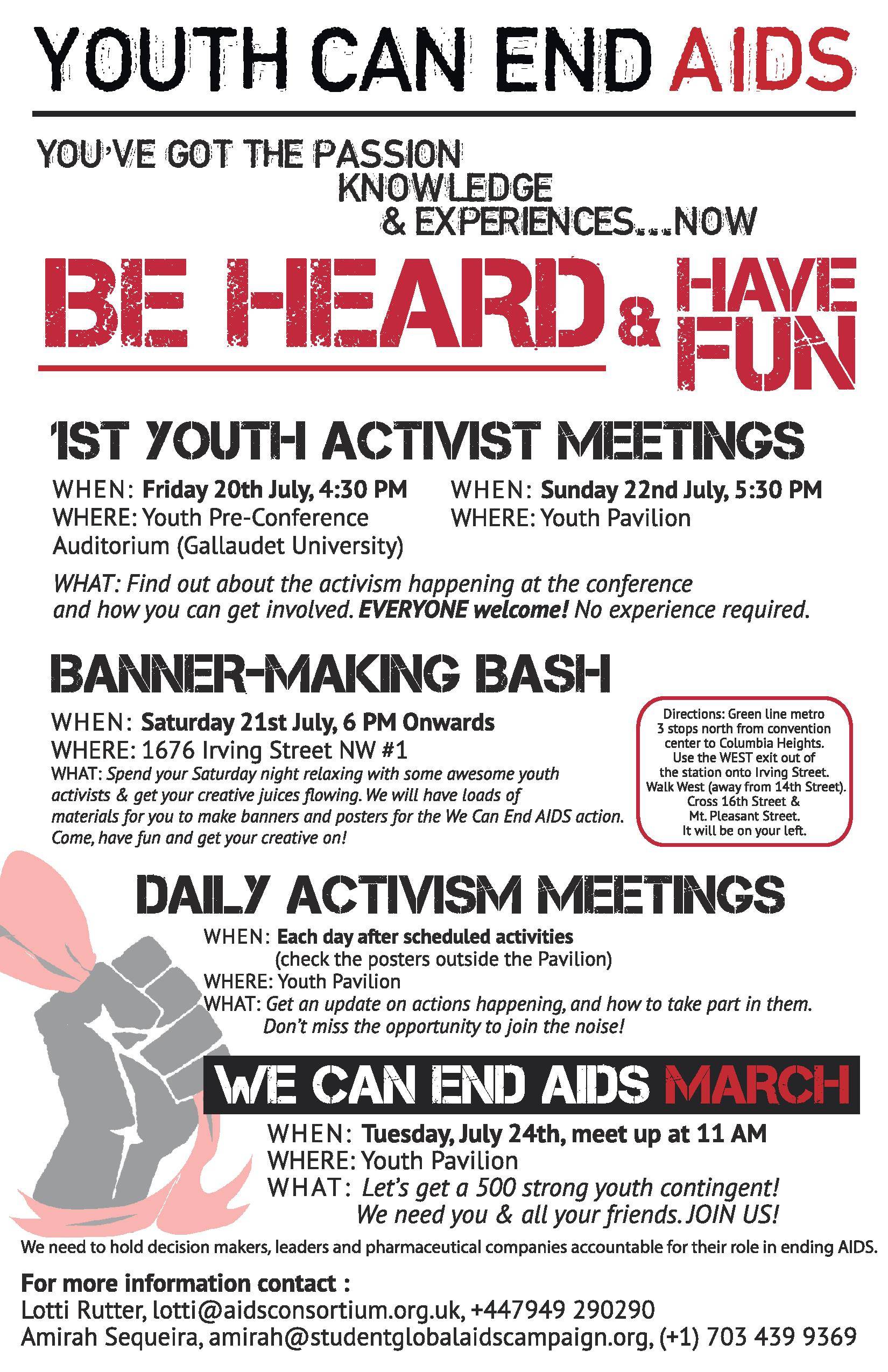 Launch of the US Robin Hood Tax Campaign

On Tuesday, July 19th, the US Robin Hood Tax Campaign launched, with several of our members participating in rallies in NYC and Boston! Check out our campaign page for more information about the Robin Hood Tax.

SGACers in Action at the 25th Anniversary of Act UP NY!

On April 25, over 1000 demonstrators gathered in New York to call for a tax on Wall Street to end AIDS. The protest also marked the 25th anniversary of ACT UP NY. SGAC was proud to march with such inspiring and accomplished AIDS activists to call for health and economic justice!
SGACers from New York City as well as Boston made it down for the rally and march. Check out more information and awesome photographs from POZ magazine.
Add your reaction Share