On December 1st I hopped off of the bus I took to Washington, D.C. from Charlottesville with a purpose. I had never been so excited upon an arrival at Union Station before, but today was a cornerstone in my young life. Finally, after years of being a member of a student AIDS activist group, the Student Global AIDS Campaign (SGAC), I was actually going to be a part of my first rally — and on World AIDS Day at that. 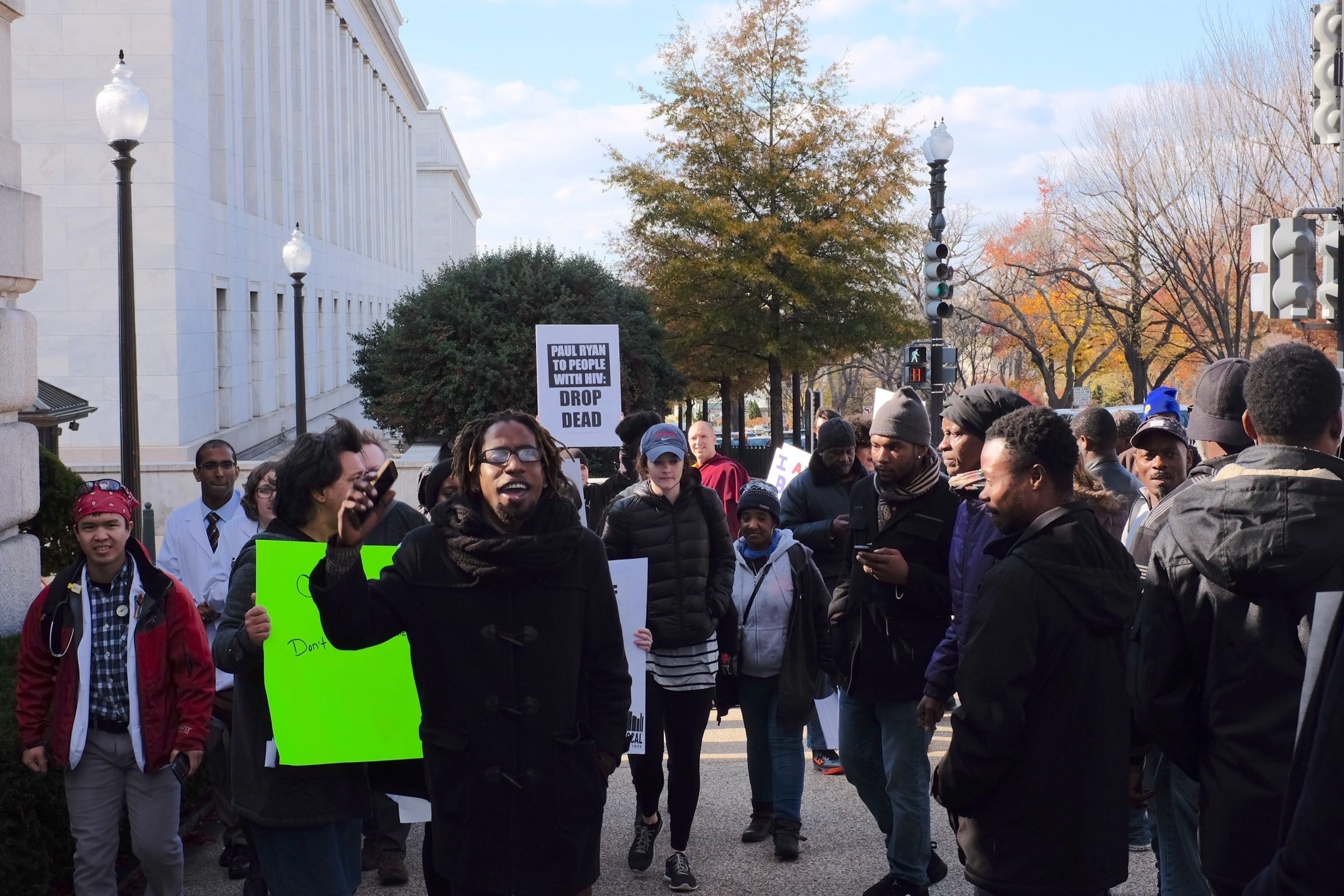 I have helped organized HIV testing events, gone on legislative visits to fight for increased funding for the global AIDS crisis and to advocate against dangerous trade deals like the Trans-Pacific Partnership (TPP), and participated in campaigns to reduce stigma in my own community, but on World AIDS Day I was extremely excited to be a part of a physical representation of national solidarity together with other domestic and global AIDS activists.

Strolling up to Capitol Hill lawn to be greeted by other newcomers and veteran activists alike with picket signs in hand was a great feeling. I quickly picked up a sign and joined in as people from a diverse set of communities began to make speeches that created a oneness and solidarity among us, reiterating why we all showed up to the Capitol that day in the first place: because health care should be a human right.

Instead, right now, the programs that support health care for millions of people living with HIV in the United States and around the world are under attack by the budget plans promoted by Speaker of the House Paul Ryan and President-elect Donald Trump’s Health and Human Services nominee Congressman Tom Price. If Ryan and Trump successfully eliminate the Affordable Care Act (ACA) as they have pledged they will, 1 in 15 Americans, including millions with or at risk for HIV, will lose their health care coverage and access to life-saving medicines. In addition to repealing the ACA, Speaker Ryan and Congressman Price plan to slash “discretionary” spending including global health and AIDS programs, privatize Medicare and end the Medicaid safety net program as we know it. Approximately 1 in 4 people with HIV in the U.S. get their health care through Medicare, which is the largest source of federal funding for HIV care and treatment, accounting for 50 percent of all funding. Two out of every five Americans with HIV rely on Medicaid for health care coverage. With these critical programs under attack, it’s no wonder AIDS activists chose to spend World AIDS Day at the Capitol fighting back.

With the Trump era nearing, I sensed that the action was shrouded in a heightened feeling of urgency, but it also served as a clear reminder that there are many ready to hold those in power accountable by defending the rights of people with HIV. Being a part of the effort was exhilarating, but watching our national SGAC coordinator and other members of the Health GAP staff and board that I had previously met get arrested for “being disruptive” in a government building was an eye opener for me. I was truly inspired by their bravery and commitment. I thought of those before me that had been arrested in the name of human rights and how grateful I am for their sacrifice. More importantly, I thought about what my life could have been like if they hadn’t done so.

Then I wondered, what’s stopping me from being able to do something like that? I walked away from the protest with a renewed sense of purpose (as I always do when I am around other activists), and with an intention and a promise to myself as well as those who depend on me to do more and be more. Rhetoric about stigma reduction and awareness are fine, but I commit to take concrete action in my community to protect the rights and advance the treatment of those living with HIV around the world. I can confidently say that World AIDS Day 2016 was the first of many protests that I will be involved with if people with HIV come under attack. In an age of “clicktivism” and email petitions, grassroots movements that take to the streets with visible actions are still imperative. We can’t let our generation forget that. There is too much at stake.

Domenic Crump is a student at the University of Virginia and a member of the Student Global AIDS Campaign steering committee.